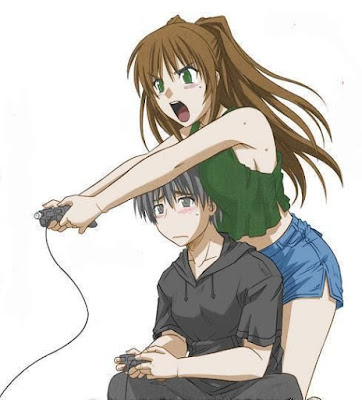 Regardless of playing the game is useful or not useful, I still like the game, because I believe the game still brings a positive effect on my life.

I seem to have been addicted to playing games. Every day I always play games to spend free time. It’s like no day without playing games.

Why Do I Like to Play Games?
I don’t know, it seems like it’s been innate from childhood. Since childhood, I really like playing games. From a young age, I really rarely played outside, and more often spent my free time watching TV and playing games.

The first time I played a game was when I was a kid, I played a playstation game at my friend’s house. Then when I was in elementary school, 6th grade elementary school, I bought a cellphone, cell phone when it was still old school and still using the keypad. If I’m not mistaken, my cellphone was Siemen M55. I use the cellphone more for playing games than for communicating. The game that I play is java game.

Then when I entered middle school, I bought a Sony Ericsson K500 cell phone, and still used the cellphone to play games.

When I entered vocational school, I bought a Nokia 6120 classic cellphone, that was the first symbian phone I had. If I previously played java games, now with that cellphone, I can play Symbian games. During my years at vocational school, I also bought a computer. Computers are mandatory in my opinion, because I used to go to a vocational school majoring in technology and networking. In addition to doing school work, I also use the computer to play computer games. The games that I played on the computer at that time were: Plants VS Zombies, Angry Birds, Worms, and other lightweight games.

The Mobile Game that I play when using the featured phone aka the keypad phone is a game that is mostly made by Gameloft. Gameloft was the most famous game developer at that time.

I graduated from vocational school in 2012. In 2014, I bought a Samsung Young 2 Android smartphone with my own money. Since then I like Android phones because they are sophisticated and have many other features. And at the same time I tried playing an android game.

I’ve had quite a lot of android games that I’ve played. The best android game in my opinion is the Asphalt racing game, Clash of Clans, Clash Royale, Mobile Legends.

Of all types of games, such as: PC games, Playstation games, and mobile games, I prefer mobile games. The reason I like mobile games is because mobile games are portable, which means they can be played anywhere and anytime. Wherever you are, as long as you carry a cellphone or smartphone, you can still play the mobile game.

I really like free games, so I always download free games at www.downloadgamegratis.my.id. Instead of paying to play games, it’s better to play free games.

Some people think if the game has no benefit at all, but it seems that is wrong. Because according to research, the game turned out to bring many positive effects for ourselves.

Some of the benefits of playing games are:

1. Make Us Smart
Some games will force you to think. Like strategizing or solving puzzles.

2. Practicing Communication Skills
Modern games now have a global chat feature, so we can chat with other people who play games with us.

3. Practicing cooperation
Some games are indeed required to build cooperation, for example is the MOBA game

4. Sportive
Playing the right game must be sporty and honest, you can’t cheat. If you win a game in a sporting way, you will feel proud.

5. Reducing Stress
Stress can happen to everyone. Stress due to lessons at school, stress due to office work, stress due to being dumped by a boyfriend, take it easy because all that can be overcome by playing games.