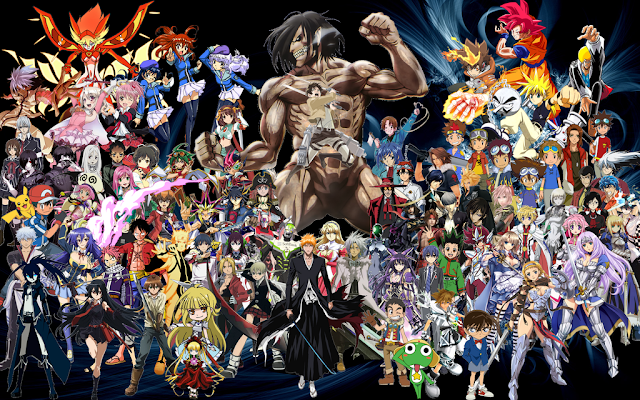 Before knowing the reason why I like Anime, it would be nice if I explain what anime is first.

Anime is a designation of an animation made in Japan. Anime certainly has a Japanese style, starting from the face of the anime characters that are like the faces of the Japanese people, and the location of the anime using locations or places in Japan, even the art culture in the anime is a culture and art that is original from Japan, the point is everything in the anime still has a relationship with Japan.

In the past, anime was created by drawing. But now, most modern anime more use computer performance, this is to facilitate the animators (animation makers) in making anime. Modern anime is better seen when compared to old anime, because the picture quality is good and already supports HD.

When viewed, anime is indeed the same as most animation. But apparently it’s different, anime has its own characteristics, so people can distinguish it from Japanese animation. Essentially, the anime was made in Japan.

The characteristics of anime are:

When I was a child, most of the time I watched anime, because at that time many anime were aired on Indonesian television. I was born in 1993, you could say that I was a 90s child. In the 1990s until the early 200s, there were still a lot of anime that aired on tv.

Almost every day, anime is always on TV. But the most anime aired on Sunday morning. So, starting at 5 in the morning until 12 noon, anime always airs on tv. Therefore, on Sundays, I start to sit quietly watching TV from morning to afternoon.

There are so many anime that I have seen. The following are the best anime that I have seen on Indonesian TV: Ninja Boy (Nintama Rantarou), honey bee hutch, Cyborg Kuro-chan, yu yu hakusho, Hunter X Hunter, Yu-Gi- Oh, Dragon Ball, Crush Gear, Lets and Go, Detective Conan, Doraemon, Crayon Shin-chan, Inuyasha, Samurai X, Ghost At School, Eyeshield 21, One Piece, Naruto, and many more, but my favorite anime is Hunter X Hunter with the main characters Gon and Killua, then my favorite anime character is Killua.

But now anime shows are rarely found on TV, but now most are not quality shows that do not have a positive effect, especially on children.

Because anime is now rarely appear on Indonesian TV, therefore I look for anime on the Internet. So I downloaded anime on the internet. Actually this is illegal, but what can I do, my hobby is watching anime.
I am not haphazardly watching anime, because only anime with interesting story lines will be watched. To find a good anime, you can search for info from an anime on the Internet. Usually a good anime has a high score, you can see anime scores and anime reviews at https://myanimelist.net or see the best top anime based on the score at https://myanimelist.net/topanime.php
Or you can, find and find out what I think is the best anime on the blog http://www.animeterbaik.info

You can watch anime on nekopoi and samehadaku. Eh, why Nekopoi? Yes, but this is a different Nekopoi, this Nekopoi is an Indonesian subtitles anime watching site. Samehadaku is also one of the best fansub in Indonesia.

Having a Hobby Playing Games is a waste of time?